This week, the Expert Group for aid studies publishes a report on the future role of Swedish health aid. The report summarizes main finding from recent international work and elaborates on the implications for countries currently receiving Swedish health aid. The following blog post is written by two of the authors of the report.

On December 3, 2013, the Lancet Commission on Investing in Health published Global Health 2035: A World Converging within a Generation. The report laid out a series of opportunities for donors, low-income countries, and lower middle-income countries to achieve dramatic gains in health by 2035. One particularly striking opportunity is to invest in scaling up health interventions and delivery systems to tackle infectious, child, and maternal deaths in order to achieve a “grand convergence” in global health. Grand convergence means a reduction in such deaths in low-income and lower-middle-income countries down to levels seen today in the best-performing middle-income countries (see figure below). Convergence could be funded by a combination of countries’ own resources and donor spending and a review of donor priorities. A key finding from the report is that since today’s low- and lower-middle income countries are expected to experience tremendous economic growth—adding USD 10 trillion to their national income by 2035—the cost of convergence could largely be achieved through domestic spending. The report argued that donor assistance could then increasingly be used to fund global public goods and to tackle cross-border threats. For example, as a low-income country’s budget grows it will increasingly be able to pay for vaccines and salaries for doctors and nurses themselves. Donors should then instead try to invest their money in more global challenges, for example combating drug resistance. 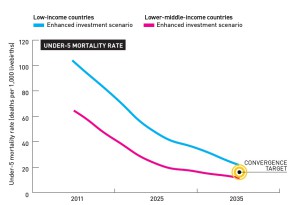 The Global Health 2035 report paints an optimistic, yet technically feasible, picture of the dramatic health improvements that are possible in low-income and lower-middle-income countries. Based on this scenario, we took on the task of studying Swedish health aid. During the last six months we have tried to develop a novel approach to analyzing the health aid of donor countries (such as Sweden) according the functions it supports. Is Swedish health aid funding local functions (e.g. salaries for doctors and nurses in a country) or global functions (e.g. paying for research on new medicines)?. A third category, “glocal” health aid, describes aid that is given to a country that has international benefits (e.g. it helps with regional malaria control efforts).
Our findings show that Swedish health aid currently supports mostly local functions (see figure below). This is not surprising, nor is it worrying, as there are still many poor countries that are unable to fund basic health services for their population. Our analysis also show that Sweden is mostly focusing its health aid on these poor countries. What we argue, however, is that over time many of the countries that Sweden currently supports will be able to pay for more basic services themselves. 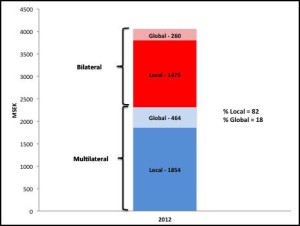 Figure: Swedish multilateral and bilateral health aid 2012 divided by local and global function
Sweden should therefore give increasingly more money to global functions. Based on what Sweden is good at, we argue that research on antibiotic resistance, for example, is one area that Sweden could give more funding to.
The report will be presented at a seminar on November 7. Discussants will be Sigrun Mögedal (Previous HIV/AIDS ambassador of Norway) and Pia Schneider (World Bank). Invitation to the seminar can be found here

By: Jesper Sundewall and Gavin Yamey