The EBA hereby invites proposals for a statistical study of the effects from Swedish and international democracy support. Deadline September 11, 2019. More information here.

The study will systematically evaluate the effects of different kinds of support for democracy and good governance, based on the most suitable and valid statistical methods and data sources for the purpose. Successful applicants are expected to have thorough experience in working with statistical methods in the social sciences and in analysing political phenomena, preferably proven through a record of publications in leading international journals relevant to the theme.

Background, aim and questions:
Democracy support has constituted a large share of Swedish bilateral development cooperation since the 1990s. This focus shall be further reinforced. The Swedish government is currently initiating a democracy promotion drive in its international development cooperation program. Democracy promotion should, according to the government, permeate Swedish Foreign policy in its totality. In the field of development cooperation, the government will focus programs and interventions in five areas: anti-corruption; support to democratic institutions and democracy’s voice bearers; election support; parliamentarism; and free and independent media.

However, disagreement prevails over the effectiveness of foreign aid in promoting democracy in general and knowledge around the effects of foreign aid in the five specific areas in which the government drive will focus is limited. Furthermore, democracy support is a more sensitive form of aid than any other form because it promotes a certain kind of governance and ultimately aims at removing authoritarian governments. For these and other reasons, the search for results from democracy support is complicated. In light of this, the present study is expected to explore results of Swedish democracy support through statistical analysis of existing data.

Some lessons concerning outcomes and effects from democracy support are available. Studies of democracy support provided by the USA have found positive effects on democracy levels (Finkel et al, 2007, Scott and Steele, 2011, Kalyvitis and Vlachaki, 2012). Since the USA has provided democracy support to a vast number of countries, these results are in one sense possible to generalize. The periods studied include 1970s and 1980s, but mainly cover the years from the 1990s up to the early 2000s.

The mechanisms whereby democracy support is supposed to impact governance relate both to structure and agency. According to Finkel et.al. (2007:409f) foreign democracy support can contribute indirectly by transforming the structural conditions that serve as preconditions for regime transition or regime survival. Democracy support can also contribute directly by strengthening agents that strive for change. Finkel et. al. also mention regional diffusion and pressure from international organizations as international factors that contribute to democratization. Scott and Steele (2011) add that ‘anticipated reactions’ by both donors and recipients may contribute. Donors anticipate in which countries and sectors democracy support may have largest effects. Recipients anticipate that good results will lead to more aid in the future, hence efforts at good implementation are made. But are these kinds of mechanisms really strong enough for democracy support to contribute to democratization, to regime change?

Another effort to link foreign aid to democratization was undertaken by the UNU-WIDER in its ReCom project (Resnick, 2013). Among a set of thematic areas within development cooperation, they studied also governance and democracy. A general conclusion concerning democracy support was that positive results are found, however not in terms of regime change. Results should rather be sought in terms of reinforcing democratic processes and hindering democratic breakdown.

Such conclusions are echoed by Cornell (2013). She investigates aid to support national democracy minimalistically defined. Hence, her results concern aggregate level democracy indicators, which could lead to regime change. She starts out by investigating how OECD donors allocate their democracy support among different partner countries. The conclusion is that democracy aid mainly is allocated in the same way as aid in general. This implicitly means that countries that are more democratic – but only up to a certain level – receive more aid (Ibid, pp 37-42).

The above discussions indicate the need for further research on the systematic relationship between democracy support and political change. In this regard, both the independent and the dependent variables need to be defined with care, and with a clear perspective for possible alternatives. It is likely that the definition of democracy used will affect results (dichotomous or continuous, further definitions), just as the definition of democracy support will. Regarding the latter, differences relating to the sectors to include, whether to include support through official channels or civil society, and whether to include adjacent sectors should be further explored. 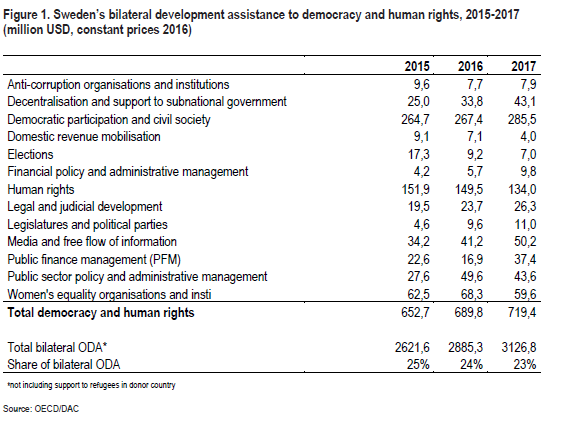 Support to democracy and human rights have continuously formed a large share of Sweden’s ODA as can be seen in Figure 1. This stands out in comparison to the other DAC-countries where the average support to this area is around 10 per cent of the total ODA budget.

The Expert Group for Aid Studies, EBA, invites proposals for a study investigating effects from Swedish and international democracy support. The study is expected to be conducted according to best available practice with regard to statistical analysis, and to explore different measures and definitions of democracy and/or proximate determainants of democracy, as well as different specifications of the main independent variable (drawing on the OECD’s CRS as detailed below). Proposals shall tentatively outline their choices in this regard. The study is expected to primarily look at interventions conducted during the last ten years, although suggestions for longer time-series are welcome, provided that they take into account possible differences in the CRS data over the period.

Overall, the study should contribute to increased knowledge concerning the relationship between democracy support (through different modalities, sectors and channels, preferalbly including the five areas of the current democracy promotion drive) provided by Sweden and by the DAC donors in general, and outcomes in terms of democratization in recipient countries. The study is expected to test different models and specifications of the dependent variables in this respect: Are certain indices more valid than others in this regard, and to what extent do they generate different findings?

Furthermore, the study will contribute to assess data quality of the independent variables and provide an overview of Swedish democracy support.

Moreover, the study should, depending on their findings, contribute to:

(i) An in-depth understanding of the effects on democracy that can be found from international as well as Swedish democracy promotion.

(ii) Knowledge concerning what areas of intervention are the more fruitful in democracy promotion.

Who is this study for? Target group(s)

The main target group of this study is policy makers at the Swedish MFA together with staff responsible for the implementation of Swedish democracy support at the Swedish MFA, at Sida and within relevant Swedish civil society organizations. Secondary target groups include people in other OECD countries and international organizations active in democracy promotion, people with an interest in democracy promotion more general, Swedish media and the general public in Sweden.

Implementation and methods
The authors are given an open mandate regarding choice of statistical models, focus areas and implementation of the study with the aim that they should let their expertise guide the choice of approach in fulfilling the aims of the study.

Data availability and quality is a challenge for such studies and evaluations. However, some widespread, respected and publicly available democracy datasets are available. With regard to the key explanatory variable, the OECD CRS data is generally the best suited dataset, where data on Swedish interventions are included..

The proposal should include a theoretical and methodological framework. It is up to the authors to choose study design, methods and delimitations (time, sectors, countries etc.), but the choices should be clearly justified, and the study should explore and test different specifications in this regard, basing them on relevant theoretical arguments.

Tenderers are expected to disclose potential conflicts of interest pertaining to members in the evaluation team, as this may be a ground for exclusion of a proposal.

For all studies, the EBA sets up a reference group consisting of experts in the field of study (members are designated by the EBA in dialogue with the authors). The overall purpose of the reference group is to strengthen the quality of the report. The group will be chaired by one of the EBA members.

The evaluator(s) shall present preliminary results at a pre-launch meeting with the MFA, Sida and the EBA, and present the final report at a public dissemination event (details to be specified in consultation with the EBA at a later stage).

Administration, budget and timetable:
The maximum cost for this evaluation is set to SEK 800 000 excl. VAT. The timetable shall include details regarding time used for each member of the project team.

The proposal should be no longer than 15 pages, including a presentation of the statistical models proposed along with a description of the general methodological approach, and data sources to be used, a detailed preliminary time table, allocation of time and functions within the team and budget (stated in SEK), Prices/Hour, Proportion of time (per cent) for Team leader/Main Author; proportion of time (per cent) for research assistant or junior employee, excluding CVs and additional annexes. At most three relevant scientific publications by members of the proposed team may be attached as annexes.

The budget shall include costs for 3–5 meetings with the reference group. If the team resides outside of Sweden, some of the meetings could be conducted via video/skype/phone. The following timetable shall be considered.

The tenderer shall submit an ESPD self-declaration by filling in the tender form at www.kommersannons.se/elite. Please allow time to complete the ESPD-form before submitting the tender.

During the procurement process, the EBA is not permitted to discuss documentation, tenders, evaluation or other such matters with tenderers in a manner which favours or disfavours one or more tenderers.

Questions can be posted between 1 July and 10 July as well as between 5 August and 2 September , on the Questions and Answers function on the tender portal Kommers Annons eLite, www.kommersannons.se/elite. Questions and answers to questions will be published, anonymously and simultaneously, to anyone who have registered for the procurement.

Selection of proposals
The following criteria will be used in the screening of proposals:

See attached table for which factors will be considered under each of the three criteria. There will be no negotiation. The assessment of each proposal will be based on the material submitted by the tenderer by the end of the bidding period.

Confidentiality
After the communication of the EBA’s selection, all submitted proposals will become official documents, meaning that the Swedish principle of public access to official records applies. Sentences, sections or paragraphs in a document may be masked in the public version if ”good reasons” (thorough motivations in terms of causing economic damage to the company) can be provided and deemed valid. The tenderers are fully responsible for making their claims of confidentiality.

About the Expert Group for Aid Studies
The Expert Group for Aid Studies (EBA) is a government committee mandated to evaluate and analyse the direction, governance and implementation of Sweden’s official development assistance with a specific focus on results and efficiency. The aim is to contribute to an efficient implementation of well-designed aid. The EBA focuses primarily on overarching issues within Swedish development assistance, not on individual projects. The EBA consists of an expert group of ten members, and a secretariat placed in Stockholm.