On February 2, EBA launched the report “Making Waves: Implications of the irregular migration and refugee situation on Official Development Assistance spending and practices in Europe ” (the report was launched during following seminar, programme can be found here, and a blog of the report, in Swedish, here).

The presentation of the report was followed by a panel discussion with State Secretary Ulrika Modéer, Staffan Landin, Kristof Tamas, Anna Knoll and Ninna Nyberg Sørensen. Moderating the debate was Gun-Britt Andersson, vice chair of the EBA. 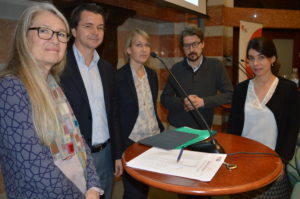 Ms. Modéer kicked off the discussion by emphasizing the importance of migration, describing it as a “driver of human progress”. Migration is a win-win-win phenomenon, she stated. Yet it is also one of the most divisive phenomena of our time. She reiterated Sweden’s commitment to development also in this context and made references to the incorporation of a migration dimension in the new Swedish policy framework and the SDGs.

The discussion dealt initially about the concept of “root causes”, i.e. push factors behind migration. Implying a degree of skepticism towards the terminology, Ms. Modéer commented that “root causes” is the very raison d’être for development cooperation. Migration should be a choice, not a necessity.

Ms. Nyberg Sørensen pointed out that corruption, lack of decent work, nepotism and violence are as important (root) causes of migration as poverty. Mr. Tamas reinforced the point making reference to the three D’s: development, demography and democracy as drivers for migration.

It was observed that the root causes discussion in Europe for the most part is confined to the development field, whereas in fact it required a whole of government approach. Responses to the migration situation need to be part of the wider foreign policy discourse, and enter fields such as trade and security.

Using funds meant for long-term development to address short-term needs arising from migration may be controversial, as the report of Knoll and Sherriff has shown. There are a number of development effectiveness concerns that need to be considered, such as the unpredictability of aid. Ms. Modéer acknowledged this concern, while reminding us that the Swedish municipalities receiving an unprecedented large number of refugees in 2015 also had to operate under a high degree of unpredictability. 2015 was indeed an irregular situation!

Mr. Landin emphasized the importance of having transparent data and that data be recorded in the same way in all countries. Today, the use of aid funds for asylum seekers in donor countries (so-called in-donor costs) cannot be verified, and less so compared with other countries. Furthermore, today’s high levels of in-donor costs mean that small alterations of definitions may have major implications for the amount of aid available for development cooperation. 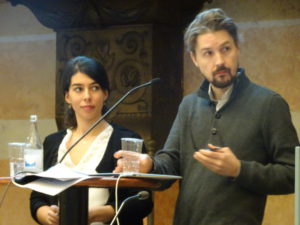 The pragmatic approach within the EU towards Turkey in order to contain migration has exposed new power relations. Former “bad guys” suddenly become “good guys” because of geopolitical considerations. Inability of European countries to work together has created this situation, remarked Ms. Modéer. As visiting Angela Merkel noted earlier in the week, had all European countries lived up to their commitments, the EU would collectively have been able to handle the 2015 dramatic influx of refugees.

In a related comment Mr. Landin noted that we ourselves have created a trade-off between migration and development. Ms. Modéer agreed, but also pointed out that trade-offs were made on all budget-lines.

On a question from the audience on Sweden’s approach to using conditionality when providing aid, Ms. Modéer responded that Sweden does not practice negative conditionality: constructive dialogue demands respect for the other party. The study clearly reveals the need for more knowledge in this domain. And our knowledge needs to follow suit with new developments in this field. Noting that the report of Knoll and Sherriff has provided us all with a better empirical foundation for decisions, Ms. Andersson closed the debate asking us all to strive for enhanced evidence-based knowledge in this field to enlighten further discussion and decision-making.