Sweden has repeatedly been criticized for spreading its bilateral Official Development Assistance (ODA) thinly. For example, the OECD’s recent peer review of Sweden’s development assistance  concluded that “In the absence of clear policy priorities, Sweden allocates its bilateral resources across a wide range of countries, themes and programmes and the evidence base behind decisions is not always clear”. Among a selection of DAC-members (Table 1), Sweden’s allocation of gross bilateral ODA to its largest recipients suggests Swedish aid to be comparably less country focused.[1]

The evidence base for this chain of arguments cannot be said to be firmly established. Still, proliferation is often used as an indicator of less effective aid. For example, the Center for Global Development’s Quality of ODA  ranking is constructed so that it penalizes proliferation.[2]

In 2007 Sweden embarked on what can be described as a “concentration policy”. It was a political decision by the Government at the time to reduce the number of countries to which Sweden gave bilateral development assistance, and to concentrate aid to these countries to fewer sectors, that is, to reduce the proliferation of Swedish aid.

The report presents a measure of concentration, the Theil index, allowing for a decomposition of the proliferation on recipient countries (between component) and on sectors (within component), see Figure 1. A higher index indicates a more concentrated (less proliferated) aid. 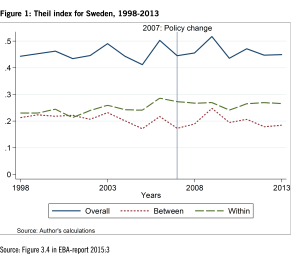 The overall result is that Swedish aid still has a high level of proliferation. Even though concentration increased after the 2007 policy change it decreased again after 2009. While Swedish aid since 2006 has been more concentrated than the average OECD-donor (Figure 2), this is due to an increased proliferation of other donors (where the UK stands out as a large proliferator). 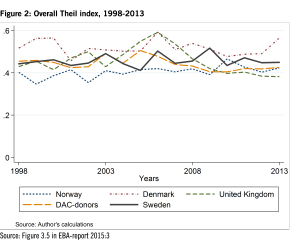 However, the report also shows that it is difficult to measure in a simple way how aid is spread between and within countries. While Sweden has fewer formal cooperation countries today than in 2007, Swedish aid is still provided to a large number of additional countries through NGOs and multilateral organisations. This is reported in the OECD-DAC database and is one explanation why Swedish aid has a high-level of proliferation. If aid through NGOs is excluded, the concentration policy appears to have had some effect on proliferation. Still, even in this case proliferation has increased again after 2009.

So how could aid proliferation be reduced? According to the report you can rely on either unilateral measures or joint action with other donors. Joint and coordinated action has been a key feature of the aid effectiveness agenda, an agenda Sweden has been a strong promoter of. Hagen, however, argues that the aid effectiveness agenda has lost steam and thus coordinated actions are less likely to be effective. Instead he proposes “going alone” and presents two main strategies for this. One is to channel an increasing share of Swedish aid through multilateral agencies. The second is a renewed effort to decrease bilateral aid proliferation. Sweden should be more selective in its choice of partner countries focusing on poor countries with relatively strong institutions. A combination of these two strategies is likely to be the best way forward, according to Hagen.

At the launching seminar of the report (listen to the EBA pod-rAIDio from the event, in Swedish here )former OECD Evalnet chair and EBA member Eva Lithman remarked that, while some of the measured country differences are as likely to be due to discrepancies in reporting of data to the OECD as due to policy, country selection is by and large driven by political considerations. However, the choice of provider and the technology of provision may have additional values linked to them that are not priced in when measuring transaction costs. It is not obvious that transaction costs (as usually defined) and comparative advantages mirror each other. Striking a balance between the two is the rope trick of selectivity, Lithman argued. Also, the strategies governing Sweden’s international aid is only allowed to have a small share of its budget pledged towards the end of the strategy period. An undesirable consequence of this is smaller projects – a more fragmented aid – during those years, according to Lithman.

EBA vice-chair Gun-Britt Andersson argued that institutional quality as a country selection tool is problematic. While some types of aid are likely to work better in countries with better institutions, institutional capacity building may be the most, long-term, effective form of aid for many countries. Thus, recipient countries’ institutional quality could rather be used as a way to prioritize between sectors within countries than for country selection. The entry and exit of partner countries are often a result of unforeseen events; corruption scandals tend to decrease the number of recipients while natural disasters and conflicts lead to short term aid activities that are often replaced by longer term cooperation agreements during periods of reconstruction. A rules-based selection model would therefore be neither credible nor viable.

Ambassador Staffan Herrström pointed out that the number of countries being granted Swedish aid cannot be fixed ex-ante. It is rather an outcome from a process of current responses to a constantly changing world, and ideally, based on an appraisal of where and how Sweden is likely to make the most out of its ODA. Such appraisals (as the background work behind the 2007 concentration policy and evaluations like the ones for Vietnam , Laos and Sri Lanka) should be part of an ongoing process of selection, and de-selection, of partner countries. However, the decision is in the end always a political one, as part of Sweden’s foreign policy.

Hanna Hellqvist, Political Adviser and State Secretary to the Minister for International Development Co-operation 2007-2013, said that the policy shifted emphasis towards concentration of sectors around 2011 in response to the slow pace of the country focus process. Concentration was often hampered by limited absorption capacity in partner countries. In addition, the new thematic priorities coeval with the new concentration policy were not linked to specific countries. Thus, strategies like the one to strengthen agents for democratic change worked towards a proliferation of aid. Moreover, an inherent challenge in country selection is that there are always arguments for why a specific country or sector should be granted aid, and these arguments are typically good! Given the political nature of aid, non-consensual priorities work towards proliferation and fragmentation. This is particularly true when the one per cent target imply yearly increases of the ODA budget.

Today, Sweden’s bilateral aid is about as proliferated as before the concentration policy. However, the new policy did change the composition of Sweden’s bilateral aid. It appears that the number of cooperation countries managed through a country strategy has decreased[3] and the 23 “phase-out countries” listed in the reform agenda have been phased out.[4] Still, the overarching goal of the policy was arguably not to phase out specific countries but to concentrate Sweden’s aid portfolio, and Hagen’s report show that this has not happened to any larger extent. Thus, the apparent absence of change hides inflows and outflows of countries and sectors. From an aid effectiveness perspective, this is not necessary bad if the compositional change is a response to real-world changes. As pointed out in the report and at the seminar, also domestic political concerns seem to have influenced the implementation of the concentration policy.

So, is proliferation bad by definition? Can aid allocation be described as a choice between feeding pigeons and breeding ostriches? While scale is certainly important in many instances, small can be beautiful in the private sector (with aid having catalytic effects), in the public sector (with piecemeal improvements of the capacity of domestic institutions) and through CSOs (strengthening civil society, deepening democracy). After all, well-functioning catalytic aid require relatively little resources and may be cloned but not scaled. This would lead to a more proliferated aid than a small number of big-push projects. Given the risk level and experimental nature of much of development co-operation, feeding the right pigeons, fostering the food chain of development, may prove more effective in the long run than a few solely aid-breeded ostriches.

[1] However, a smaller share in comparison to other countries need not indicate a lower absolute value of aid disbursements.

[2] The indicators focus/specialization by sectors and recipient countries.

[4] However, 6 of the 23 countries (El Salvador, Haiti, Ivory Coast, Lebanon, Nigeria, Pakistan) did not appear in the list in the budget proposal already in 2006.